Students from the 7 Art Elective Programme (AEP) Centres strut their stuff at NAFA Galleries 1 & 2. The Art Elective Programme, initiated and funded by the Ministry of Education, allows academically inclined students to pursue art under an extended curriculum under the various centres. Their course of study entails studio practice and theory, ranging from 2.5 hours to 5 hours of art a week (excluding overtime on the part of students, teachers, and sometimes parents!).

When I visited the gallery on a Saturday, young visitors, possibly students in the NAFA children’s art classes accompanied by their parents seemed delighted by the visual spectacle -artworks in a variety of subject matter and media. An adult visitor was quick to note the maturity of methods of expressing their various ideas, and technical competency of these students’ works. Another artist friend commented that some of the works are better than some of the diploma art-school works.

One mindset to access these works, is to consider the themes these teenagers choose to express, either as personal commentary, expression or observations. If art is a reflection of society, then these works may very well allow us an insight into the thinking of some youths today.

Note: Pictures taken are biased towards works of ex-students from NYGH, where I teach. 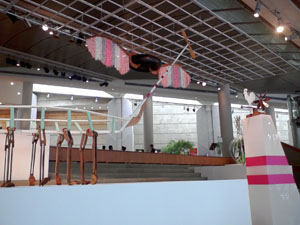 The work plys dangerous murky waters of confusion and superficiality. A visual compilation of Malay idioms inspired sculptures, Zainudin has chosen to juxaposed seemingly random, unrelated objects into an assemblage than symbolises more than the sum of its parts. A mixture of a use of ready mades and hand crafted wood or bend aluminium, they take on bewildering visual-relations that almost numbs – because they do appear rather whimsical in nature.

I honestly think the exhibition would have been a lot more educational, satisfying if the original Malay idioms were made known to the viewer. Even though this might take the fun out of guessing, I think the audience can better fanthom the depth of Zainudin’s craftsmanship and appreciate the source of his inspiration – idioms and not base-less visual idiosyncracies. 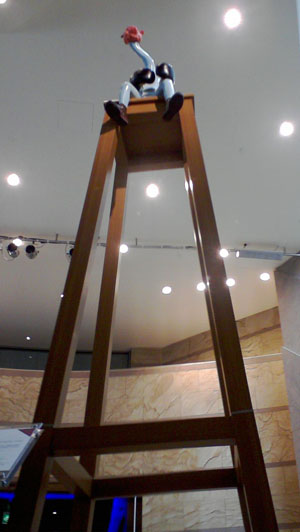 Whose Playground Is This?

The exhibition tries to show the backstage of art production, by allowing 3 artists to react to the relationship (or lack of) artists have with curators. Jeremy Sharma presents a film noir enigma of “Who Shot the Curator?”, exhibiting photographs of executed curators, friends of the artist in witty play-dead poses. Ana Prvacki, dodges the critical question of curator-relationship and chose to focus on the honest artist’s image as central to art making, and less under the dictatorship of curators. She shows a video tribute, titled “joys of collapse” to her dead goose, aged six that died on July 7, 2007. Tang Ling Nah chose to plunge into the deep end of the given theme, by inviting 12 other artists to respond to the relationship of artists-curators, publishing a limited edition art book documenting the process, a bold step away from her palate for large charcoal drawings.

The small exhibition felt exclusive, perhaps because the understanding of the term curator hardly gets past exhibition organiser, let alone ‘collaborator’ or visionary director of a film where artists are the stars – they each have their own share of fans. Either the curatorial statement for the exhibition promises too much, or I’m missing out on visuals/artefacts that should have been there to make the visit more worth while. The theme of the exhibition, no doubt an important one for those in the circuit, will appear dry to the average Joe and Jane.

If the errata [“errata: In pages 15 & 16, Tang Ling Nah’s name is mis-spelled. We apologise for the error”] included in the exhibition curatorial statements are anything to go by, the role, function and credibility of curators in Singapore require auditing and scrutiny by artists alike and members of the public. Art sometimes is more serious than play as seen in Ling Nah’s subversive curating; even if at times art is playful as seen in Ana Prvacki and Jeremy Sharma’s work, the play pen shouldn’t just belong to artists and curators but a willing public/audience as well.

“An exhibition that highlights the redefinition of the curator’s role behind the process of putting on A SHOW today, right from the beginning even before an artist creates the work, (Whose Playground Is This?) looks at the very foundation of art exhibitions AND the artist-curator relationship.

Whose Playground is This? toys around with current definitions of artist and curator, and the process of how we view and interpret art. The curator, an important influence on an artist’s exhibition, used to mean just cataloguing, interpreting and documenting artefacts and collections of institution. Today’s world of art, however, has started to blur the line between artist, curator, collector and museum director, leading to the question of just whose playground does art belong to?

“We wanted to explore all these questions about ownership of exhibition work. Really, where does one work stop and another start? Can an artist’s success solely come out of his or her own work and ability, how much of an influence belongs to the curator who frames their work and in some cases entire art practices? And don’t forget even patrons or collectors – how much credit (of even an artist’s fame) should go to them?” says David Chew, curator for Whose Playground is This.”

A minimalistic cube-in-cube, the small-scaled but unconventional single white-book exhibition by John Clang will tickle your shutterbug senses. The ‘cube room’ with one table and chair is lit by an arrangement of zigzag ceiling fluorescent tubes, suggesting a photographer’s studio or a space that isn’t afraid to show evolving experiments, blemishes and foot prints.

The photographs reveal and review his honest progressive exploration of techniques, and personal spaces, cover to cover. Personal spaces are expanded, imagined and manipulated to stretch photography to the lay-person.

The aura of the commercial fashion photographer aside, the singular take on photographic possibilities should enthrall.