“1to9 is a series of works that engages with the poetics of numbers and the imagery conjured through numerical association. The research for this series of work examines the forms and connotation of numbers, and connects numerals with words,images of common objects and occurrences.” (Wall Text)

The origins of arabic numerals might seem unbelievable to many. The Anglo-Saxons or the Romans certainly didn’t invent it to go with ‘English’. But the strange narrative nature of these drawings seem to tell a tale other than the history of numbers; it seems to be typographers’ ‘type play’, re-writing phrases with numbers. For example, would ‘cloud number 9’ mean the same as ‘boat 9 at sea’?

The recent drawings by Ang Soo Koon differ slightly in thought and presentation from her work in Found & Lost. The exercise into numbers may seem minimal, and playful, almost like storyboards for Sesame Street episode, playing out a number game for kids. But there aren’t 9 boats with the letter 9, so things aren’t quite what they seem. Examining the quality of line of each individual drawing, they are acutely loose in composition, generous in space for the imagination to roam. The feel of the work resonates with the kind of sensibility of Sandra Lee’s Fables series,unfolding  mise en scène, like child’s play.

In a simplistic interpretation, the drawings are like snapshot portraits of numbers in their various travels. In a complex manner, it associates the signifier (physical scribble of a number) to the sign (the concept of a numeral), and narratives not bound by the sign, but by an imaginative narrative.

As simplistic as it might sound, if we pare down the world with mathematics, it  is made up of numbers. The web page you are reading is ultimately a digital signal consists of ‘1’ and ‘0’.  Anyone who has watched Π (1998), directed by Darren Aronofsky, or queues to buy 4D would agree that our lives are surrounded by divine numbers. But in a life not governed by numerology, there might be things prettier, more intriguing than numbers, no matter what dress they wear.

Between Persistence and Resistence

“… the invisible power that is invested in this dehistoricised figure of Man is gained at the cost of those ‘others’ – women, natives, the colonized, the indentured and the enslaved – who, at the same time but in other spaces, were becoming the peoples without a history“. – Homi Bhabha, The Location of Culture 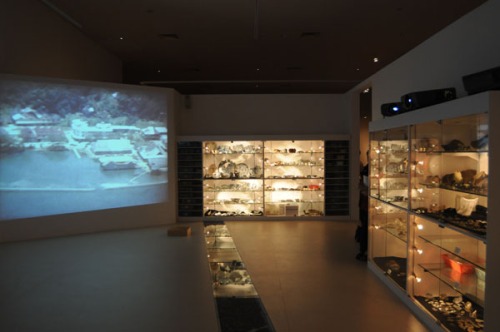 One not familiar with the works of Erika Tan might find the 3 Channel projection baffling and at least confusing. One might not be used to watch 3 screens in a cinema setting, let alone something atypical and non-narrative. They appear disjointed at first glance, showing archival footage gleaned from materials held in the British Empire & Commonwealth Museum archives, placed in a room full of the museum’s collection. The artefacts that relate to the lifestyle of the inhabitants of our island enclose this display archival square. They are neatly arranged in cabinets, purposefully heightening the preciousness of broken pieces of ceramics and metal. Across the space, a gutter runs across, carrying more pieces of ceramics but now arranged to resemble a meandering river bed, enclosed, protected, distance by hardened glass. Those familiar with Erika Tan’s work will know her work is often a mediacy a post-colonial cultural examination, informed by geography, narrative and haunting of the British Empire in contemporary society and culture. On closer examination, they have every bit to relate to the archaeological findings in the room. Both are archival, and presented as objective as we would imagine them to be. Both sets are anthropological because they show different lifestyles of different societies. As fragments, they are ambiguous, uncertain of the artist’s and curator’s real purpose in this juxtaposition. Taking cue from the title, the work possibly suggests the persistence of thinking about the world in post-colonial terms. The brutalities of colonialism (invasion is too strong a word) is often glossed over by benefits of international trade and commerce, law and order, civility and unifying lingua franca.

We are informed by a wooden box, standing in for wall text, that the projection is in 4 parts, looped after 24 minutes, bringing us glimpse of a selected past, from a selected view point. The other viewpoint, because it was not filmed, is lost. We see Africa, topless black women carrying soil on their heads, toiling in line as they clear the land for some kind of construction. We see the pyramids of Egypt, the Middle East, the Orient and the Far East of Borneo. The explorer’s companions sometimes appear in the film, riding a donkey badly, or smiling happily like a tourist on holiday. The subjects of these footage often stare blankly into the lens, perhaps waiting for the explosion of the flash gun. The inconsequential moments of daily life are captured originally on 16mm or 8mm film, historically inspired by Louis and Auguste Lumiere from circa 1895. In 1895, everyone was awed by the moving images, collectively enthralled in a darkened room, a lit screen that showed a window into the past, and other worlds. Incidentally, Cinema was born with the documentary.

There are possibly two attitudes one can take towards Erika Tan’s work. Firstly, at face value, appreciating the cinematography for its formal qualities such as composition, powers of observation, attention to mode with light and shadows. By doing so, taking the archive footage out of their original context, dehistoricises it, making them mere moving images in curious settings. They are abstract, fragmented, and might go surreptitiously well in a club with loud pounding trance music.

Secondly, “Persistent Visions … create(s) an interpretative space, activate personalised readings, allowing for the failure of comprehension and to compromise and make difficult, total consumption.” The meaning of the artwork, is thrust in the heart and mind of the viewer. One might find the moving images scratched and aged, enigmatic and unsettling. The person who filmed it appeared half part of, half observing these moments of daily life. In the process of filming, they have included fragments of their coded, personal history. These footage are more exotic than nostalgic, and questions the authenticity and ownership of this artwork. The artwork exists for Erika Tan as the self-reflexive concept to assemble these flashbacks, presenting an edited, nonchalant but polarised viewing of one’s colonial history – the coloniser or colonised.

A deeper consideration of such archival documentaries reveal the danger of a style, then and now, that is dogmatic and pretentious about the world. The film maker is powerful, being able to make choices of what he or she wants to film. The subject, possibly unpaid may be exploited, powerless about how the film might turn out. Cross-cultural filming making is problematic. The interpretation of another culture, put through the lens that is determined to deliver a cinema experience, might end up stereotyping a culture, perpetuating ancient or new misnomers. Borat: Cultural Learnings of America for Make Benefit Glorious Nation of Kazakhstan (2006), starring Sacha Baron Cohen, a mockumentary comedy directed by Larry Charles is an example of this.

Resistance by the subjects, loyal to the Queen or not, is futile. 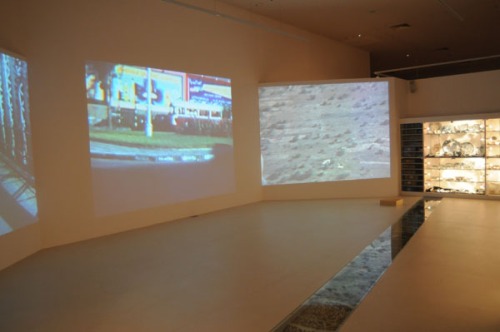 I Polunin at NUS Museum

persistence, familiar and the exotic

The exhibition title I Polunin no doubt has two implications and meanings. Firstly, it is the initials of the prolific British physician, Dr. Ivan Polunin. Secondly, a self-proclamatory exclamation between pride and conceit, “(It is) I, Polunin”.

My first encounter with these moving images stems back many years in a forgotten exhibition at the pre-renovated National Gallery (now National Museum of Singapore), and more recently in Tan Pin Pin’s Invisible City (2007). According to the director, “Invisible City documents the fight against the the passing of time and the atrophy of memory”, and the materials and life-long work of Dr. Polunin featured strongly in the film. This unique collection, aptly named the Dr. Polunin Collection, records the daily scenes of Singapore life in the 1950s and 60s, providing rich visuals for ethnographic study of the development of a nation from tribal, rural, coastal to cosmopolitan-urban, and global. The archive of 16mm film footages captured the Singapore that we have all but forgotten.

His position is unique, straddling the roles of an academic and a historian. He was teaching Social Medicine and Public Health at the then University of Malaya, and numerous opportunities led him to provide film footages to National Geographic, the British Broadcasting Corporation on wide ranging topics of sailing boats in South East Asia to studies of people.

In this exhibition display, we are led to imagine the obsessive need to ‘document’ to record everything before it vanishes. The only other artist that can came to my mind is Koh Nguang How, in detail and loyalty to his persistence. The 8 metres long cabinet lay like a cabinet of curios, shelving a mix of maps, film canisters, a Beaulieu 16mm camera, lens, projectors, sound recorders, monitors and more. The juxtaposition of notes, re-printed photographs and digitised 16mm film footage adds to the nostalgia. What is amusing, for me, was the playback of the ambient ,consistent drone ‘digitised’ from a 16mm projector, capturing and re-staging the ambience of such a projection event. The sound of rattling film and hum of a motor, will no doubt be unfamiliar to many.

The potency of these images, lie in the rich colours, and potential narratives. Unlike proper documentaries, these are like silent movies, not unlike the lumiere brothers when they first shown moving images to any audience.

The idea of narrative is deliberately fragmented, and presented akin to an installation. The fragmentation is perhaps, an attempt to look at these archives objectively, providing a lens to critique the amount of progress Singapore has made. The exhibition did open on National Day’s eve. But subjectivity creeps in, like all art intepretations. We are left to bridge the gaps of his story, and our own stories. Were there familiar places, or are they all exotic by the distance of time?

Watching the footages by myself would have been different to watching them with my mother. She would interrupt the projection to add agreeable remarks that life was like that in Pasir Panjang, the farms in Sembawang were like that and so on. There’s a scene of 3 children playing a hopping game, back facing each other, one bent leg kicked back, supporting each other in a triangle ‘fold’. She added that children in those days had no toys to play with. She also remarked that some of the children in the photographs were around the same age as her, and they would be in their 60s. The digitised film footages had a strong pull on one’s imagination, if only we let them. I had imagined the farm boy in the film to be an old man sitting at the coffee shop. This old man, with a boisterous voice and a bottle of Guinness between meals,would perched on the ubiquitous plastic chair,a cigarette in one hand, the other gesturing, lamenting of by-gone years, and the indecency of not being able to eat one’s own home-grown vegetables. I would imagine my father as a child, running along the short beach at Pasir Panjang, where the port now sits. I imagine the bulldozer tearing through the kampong houses, flats, cinemas and libraries. I can imagine that we are destroying ourselves.

NOSTALGIA – With its Greek roots–nostos, meaning “to return home” and algos, meaning “pain”–this word sounds so familiar to us that we may forget that it is a relatively new word, as words go. It was coined in 1688 by a 19-year old Swiss student in his medical dissertation as a sophisticated (or perhaps pedantic) way to talk about a literally lethal kind of severe homesickness (of Swiss mercenaries far from their mountainous home)
Johannes Hofer, Dissertatio medica de nostalgia, oder Heimwehe (Basel, 1688), translated in The Bulletin of the Institute of the History of Medicine 7 (1934): 379-91.