The World Outside by Tang Ling Nah

The World Outside is really the world inside. Artist Tang Ling Nah has surpassed her earlier charcoal drawing environments to create scenes, or chapters from imaginary black and white interiors that peer into ambiguous spaces. These distant spaces resemble windows, which look out into imaginary landscapes or labyrinths of rooms. These rooms are terribly lonely and desolate, echoing Tang’s earlier drawings in Send me an Angel (2007). Like a metaphor for the complex urban mind,  the work is claustrophobic, hurried and ubiquitous.   Mirrored and shaped by the concrete jungle we live in, the windows and rooms appear cold, unfaltering in the artificial warm light. They seem to absorb the sound of footsteps as passerbys tiptoe pass, some stopping for a quick photo.

The drawings on the wall and segments of carpeted floor alter the tunnel linkway, changing the mood and perception of space.  No longer are the walls barren and unimaginative, no longer are they only utilitarian or tunnel like. The  sections  of drawings resemble blocks of thought, and seem to encourage the viewer to find their own wall/space. Staircases descent or rise, depending on one’s point of view. The passage way resembles a long, series of rooms like those found at Versailles Palace, Paris. The marks on the wall intrigued some to leave their mark too. 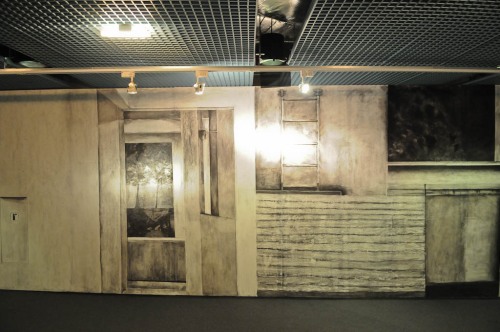 What was effective in the large scale interior installation was the successful change of mood in the dreary tunnel. The additional ceiling lights and spot lights lit the wall charcoal drawings just sufficiently to make them appear mysterious and covered the blemishes of the wall. Additional panels were constructed to push some blocks of walls out, carpet was added, creating sections, as if breaking the train of thought of the transitory visitors that streamed through the passageway. Seats allow visitors to sit and ponder, watching the crowds drift pass. The sections of drawings resemble the way our minds drift through memories and consciousness, and everyone’s drift is different.

I can imagine why the work would not appeal to some. Many are seduced by the colours of the world, made possible by the wide gamut of possibilities they see in full coloured  high definition panels and prints and not simply in black and white. The play with constructed feature walls, pillars and seats were too well fitted to the wall drawings. By limiting obstruction obstruction and ensuring the passageway is well lit, the drawings could not respond to the many artificial lights to create convincing illusionistic shadows. The result, a potentially monotonous experience, too blended with the mundane to stand out. What might have been worth considering was creating a singular pinnacle or climatic experience in one section, rather than many. The rest of the sections could be subordinated to lead up to one main attraction. These other sections could contain fewer drawings, fewer structures, increasing in intensity towards the main section, just as how CTE tunnel lighting greet vehicles with diminishing intense yellow light before gradually transiting to fluorescent light.

The artist intended for the drawings to be the extension of one’s imagination, and allowing them to be filled with strangers and contemplation. Just like passing a music CD shop hurriedly, we might hear a familiar tune that jolts vague memories the titles, lyrics or personal history they associate with. Here, the title of Tang’s installation reminded me of “The World Outside”, sung by actress Zhou Xun in the musical Perhaps. Love (2005) directed by Peter Chan.  The work  thus might be about love, lost and found, as suggested by Rikey Cheng’s poem on one of the walls. It might be about the perilous ‘world outside’, captor Gothel warned Rapunzel, against venturing outside the tower in Disney’s Rapunzel: A Tangled Tale (2010).  The artist has left the viewer to decide what to make of these drawings and spaces, with no beginning and end.  Our imagination is what confines us, not the drawn walls. Tang’s passage of drawings are too emblematic to forget, but perhaps, too subjective to imprint a singular interpretation for all.

This entry was posted in Blink 30. Bookmark the permalink.